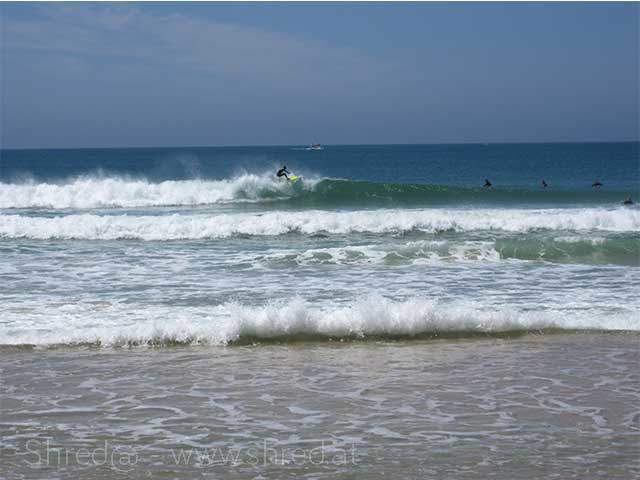 We just got back from Portugal – this time, we spent the whole week at one of the most versatile surf spots on the westcoast (90km north of Lisbon). We have been to Peniche! This peninsula (formerly an island) was separated from the mainland by a small channel. Over time the channel got silted and formed the peninsula as it is today. Some locals claim that Peniche is THE most extraordinary surf spot in Portugal. Due to the shape and beaches on all sides of the landmass, there is always a spot to go surfing…no matter from which direction the wind blows or the swell is coming from.

Surfspots in and around Peniche

The north usually gets lots of wind (yes, there are kitesurfers around) and higher waves, the south is a little more protected and gets smoother waves.

The long sandy beach of Praia do Medão is well known for its Supertubos spot. This tube breaks to both sides not far from the beach. On a sunny day the turquoise water and the nice shape of the waves is simply beautiful. The spot is usually frequented by advanced surfers and admired by beginners and spectators.

But Supertubos is not the only barrel on the at stretch of land of Praia do Medão. Nearby, in the direction of the harbour, breaks a smaller version (usually to the right). The spot is called Molhe Leste.

Another popular spot north of Peniche is Baleal. At peak times this beach literally belongs to the numerous surf schools and the sand is scattered with people and surf boards. Further out, the advanced surfers have their lineup.

The Praia do Gambôa is located on the south side of  Baleal and on the outskirts of Peniche. The wind is usually pretty strong and perfect for advanced kite surfers.

Where to stay and what to expect

If you want to stay close to the center, the Peniche Hostel (PH) is a nice place to stay. In case you prefer it a little more private, they also provide accommodation in studios (at Praia do Gambôa),

Once per year, Peniche is hosting the Rip Curl PRO Portugal. The event is part of the ASP World Tour and usually takes place in October (this year on October 9th – October 20th).

It has been a pleasure and we are definitely going to be back!