SPOT ON: Wintertraining on Tenerife (Spain)

A buddy of mine just asked for tips on mountain biking on Tenerife, so I decided to put together a quick post. We have been to Tenerife in February, kicking off our training for the season to come. Yes, that meant the Canary Islands AGAIN. This time, the largest island of the bunch and ‘the big sister’ of La Palma, was next in line. I was quite curious about how this trip would turn out. For me, Tenerife had always been a typical tourist destination of the 80ies. So I pictured it as an island with lots of architectural blunders scattered along the coast. But, as always – there is more than what meets the eye…

During our research, we spent an endless time scrolling through booking engines and reviews. The larger and more touristy hotels were quite expensive. Plus, most of them sounded more like temples for the masses instead of an oasis to chill. In the end, we decided to rent an AirBnB in the center of Puerto de la Cruz. As it turned out, we discovered a real treat (apartment) not far from the ocean. Jacuzzi on our roof terrace!…just saying. 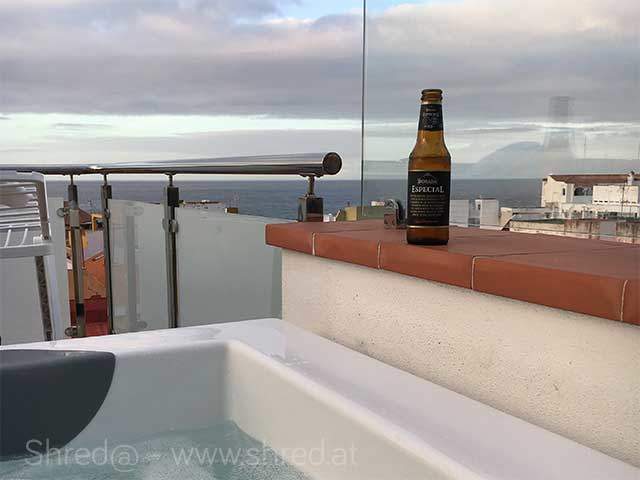 We decided to take it slow. I did not bring my Stumpy, since the plan was to work on our endurance (on the road) later in the week. Thus, we had booked our bikes and guiding with the BikeSpirit Team in advance. The first three days meant ‘all things Enduro’. Our guide Boris had picked some pretty nice trails for us and we were able to test the Giant Trance. We enjoyed a mixture of technical passages, switchbacks and the most rewarding panoramic views. When I look back, I guess the trail above ‘Bajamar’ (featured above in the header) was my favorite.

The following three days, we stayed on the road. It was a nice change of movement and good for our muscles to recover a bit. We made some distance and were able to explore other parts of the island along the coast.

From what we experienced, Puerto de la Cruz is a good starting point for road and mountain biking. In comparison to places in the south, it is quite urban and has some gems to discover when it comes to food. Since we stayed at an AirBnB, we tried to test a different restaurant every day. Our favorite was a small place ‘en la Calle de la Verdad’ called La Cocina. The food was excellent and the owners super friendly.

We had a really nice time on Tenerife. If you already got the pleasure of riding some trails on La Palma, you will probably also like what you find here. Thumbs up!

bikespiritcanaryislandsendurogianttranceguidingmountainbikemtbpuertodelacruzroadbikespaintenerife
On July 4, 2017 • By Nina
0

SHAPE UP: Trails and Bike Parks ahead!

January 6, 2017
Previous Post First race in the Enduro One Series
Next Post Breakfast Ideas & Routine for Your Bike Days

Hi, my name is Nina. I am a passionate mountain biker and love surfing. I like being in nature and enjoy travelling – both preferably with my bike. On shred.at I share stories about mountain biking, bike destinations, my van conversion and adventures with Winnie.

Remote Work as an Outdoor Nerd