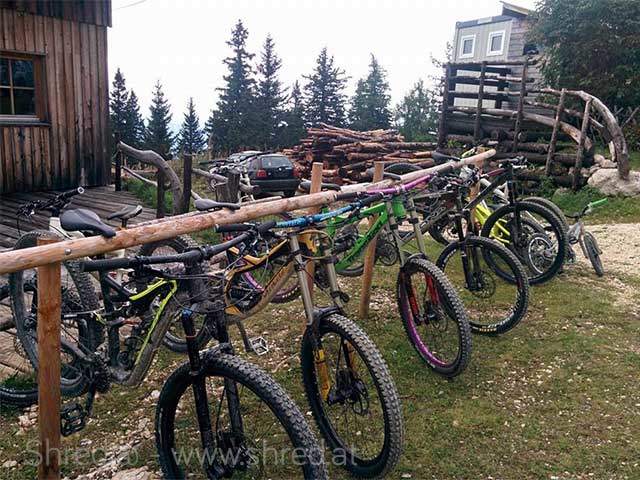 We had a fabulous summer – full of mountain biking and the joy of discovering new areas in Austria. So with this in mind, we decided that the end-of-the-summer event should take place somewhere we haven’t been before. After thinking about it for some time, we figured that there was one destination coming up in conversations over and over again in the last months…the Petzen Flow Country Trail (which opened up quite recently in the south of Austria) in South Carinthia’s Klopeiner See region.

All things packed for a weekend in the south

The weather forecast was giving us a hard time…the temperature was about to drop to under 10 degrees Celsius und the sun, that has spoiled us over the summer, was about to disappear behind dark rain clouds. But in the end this was quite an advantage for us. The light rain added up to super conditions on the trail and the few people ignoring the weather were scattered in the whole area so that we sometimes got the feeling to have the track for ourselves.

What to expect on Austria’s first Flow Country Trail

The Petzen Flow Trail is definitely a playground for all levels of mountain bike riders and can be ridden with a Fully or Hard Tail. The latter might be a better choice in case you want to get the most out of the pump-track-like areas of the trail. Altogether, the trail is 10km long and just perfect to easily wind down the mountain on super flowy tracks with banked curves, tables and small kickers.

In addition to the Flow Trail there are three Cross Country routes and a little Pump & Dirt parkour.

We had a blast at the Petzen Flow Country Trail and will be back next year!

Hi, my name is Nina. I am a passionate mountain biker and love surfing. I like being in nature and enjoy travelling – both preferably with my bike. On shred.at I share stories about mountain biking, bike destinations, my van conversion and adventures with Winnie.

Remote Work as an Outdoor Nerd